A Dozen Eggs and a Buck 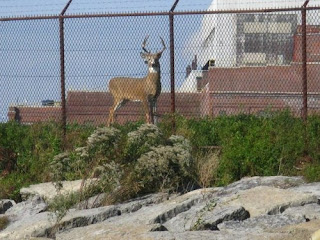 Webshots album: http://bit.ly/StrawIslandCleanUp09
Strawberry Island Clean-up Nov. 2, 2009
I was off today, the weather was ideal, and I wanted to paddle. We decided to do a clean-up on Strawberry Island (in the upper Niagara River near Buffalo, NY), since my Monday paddlers and I visit that scenic location often from May through October. Jim and Jinny were not available, but Patti Z. showed up at the Town of Tonawanda boat ramps at the foot of Sheridan, near Aqua Lane. We came prepared with gloves and trash bags, and I also brought an iron rake. The river was beautiful, calm, and flat, as we paddled out of the small “harbor” and into the current of the Niagara. There was one fishing boat on the water when we made the crossing. A large flock of small gulls (about the size of the Common Tern) were feeding on a school of small fish. I didn’t recognize the species of gull, and they were much smaller than the Herring Gulls and Ring-Billed Gulls that are commonly seen there (I think they were migrating Black-headed Gulls) . We landed on the outer strip of sandy beach on the eastern (Tonawanda) side of the island and prepared to gather trash. Patti took off walking along the shore while I waded into the milkweed pods and brambles of the interior. Unlike last spring, there were no animals to be seen anywhere on the island, except for a couple Canada Geese sitting on the northern shore. While picking up all sorts of rubbish, I also saw several goose eggs laying unattended on the ground, apparently abandoned when the embryos failed to develop earlier this year. After an hour or more, we came back out with nearly full bags of various items. I also sported many briars all over my clothing. We left most of what we had gathered by the boats and moved in the other direction, onto the broader, flatter, more open section between the river and the lagoon. There were a few flat trampled spots that had obviously been used by waterfowl hunters, as evidenced by the concentrated trash, including spent shotgun shells and beer cans. By the time we had walked all over that section, we had already been on the island for over 2 hours. We loaded the trash bags into and onto our kayaks and paddled upstream, around the wavy point, and took out again on “Goose Poop Beach”, the broad sandy beach that faces upstream toward Buffalo. In contrast to where we had just spent so much time, this beach was nearly litter-free. Obviously, there had been a beach clean-up there in the last month or 2, and we had to look hard to find a few pieces of glass in the sand. Moving into the trees and away from the beach, Patti found a few beer cans, and I picked up an old rusted charcoal grill. That area was refreshingly clean, so we soon moved on again. We paddled around the next point and cruised the shore, going downstream. When we reached the open end of the lagoon, we split up and paddled the inner shoreline of the island. Once again, I found the littered site of a duck blind, and got out to clean that up. We met again at the far inner end of the lagoon on what I’ll now call “Beer Bottle Beach”, another thin strip of sand that had broken glass everywhere - in and out of the water. We spent at least another half-hour there picking up glass, and Patti also picked up a large iron hinge and a railroad spike. We also saw a few very large freshwater clam shells in the water. By then, we had walked almost the whole island, and I was getting tired. My trash bag had grown to a huge size, and was held onto my kayak by laying the rake handle across it with a bungee cord to hold it down. We paddled back down river and across to the boat ramps. Just as we were approaching the ramps, I looked to my left, did a double-take, and saw a large deer with a really nice set of antlers. He was standing behind a chain link fence and looking out at the water. I snapped a couple pictures of the big buck, then he walked back along the fence line, as if trying to find his way back out of the enclosure he somehow got himself into. Patti called the SPCA, and they were going to alert the landowner to open a gate so the deer might find his way out again (“Out of the frying pan and into the fire”). I dumped all the trash in, and next to, a town trash tote, and we were finally finished. After about 4 hours of clean-up, Strawberry Island was a nicer place to be.