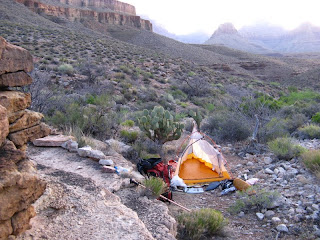 
In the above short clip, Brian describes our hike...

Notes:
Our map of choice for most trails in the Grand Canyon: the Sky Terrain Grand Canyon Trail Map by Kent Schulte.

I am not an obsessed ultralight hiker, so I can't supply a complete list of exactly what I carried and how many grams everything weighed. However, if you want to know more about the gear or food I carried and used (or didn't use), I'd be happy to elaborate. adkpaddles.bvh@gmail.com

Of course, after experiencing HYPONATREMIA, I researched it on line and learned all about the cause and cures... too late for me, but perhaps helpful to you. The best info that I found so far is from a document on the Grand Canyon River Guides web site http://www.gcrg.org/gcrg.htm Prevention is emphasized. Don't allow yourself to become dehydrated or malnourished. Drink and eat frequently, even though your appetite is suppressed from heat and exertion. You must eat and drink! Gatorade alone is insufficient to replenish all the electrolytes you can lose through perspiration over the course of time while hiking in desert conditions. You must eat, and those healthy power bars won't do the trick – eat salty snacks (crackers, pretzels, etc.) - even junk food. You need calories and sodium in these strenuous conditions! Read the complete article at http://www.gcrg.org/bqr/14-1/hypo.html

** The “Winter 46” refers to a list of peaks in northern New York State’s Adirondack Mountains. A hiker who cumulatively climbs all 46 Adirondack “High Peaks” (over 4000 feet) during calendar Winter earns the distinction of being a “Winter 46er”. There are currently less than 450 winter hikers/climbers who have registered as having accomplished that feat in the past 50 years of record keeping. www.adk46r.org

Next up: June 18-21 - a classic Adirondack canoe trip; the Low’s Lake-Oswegatchie River Traverse

Posted by Algonquin Bob at 7:12 PM