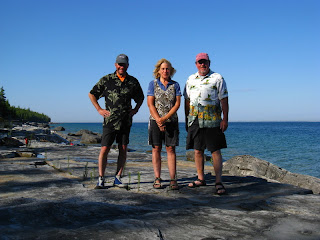 
MORNING GLORY
Because we were able to sleep in our tents without a rainfly to block the light and our view of the sky, I awoke to see the beautiful pallet of color that the sun painted the morning sky before the life-giving orb was actually visible. It was 4:30, and clouds were being illuminated and “coloured” (we were in Canada) from below, as the earth slowly rotated to begin another cycle of light.
I wiped the sleep from my eyes, found my glasses and camera, unzipped the tent, and crawled out onto the wooden deck. My friends were still sleeping, or pretending so, in order to delay the inevitable. While sitting on the edge of the platform, I had an excellent view of the polychrome scene unfolding before me. With my “good camera”, I snapped away, capturing images with varied compositions of shore, tree, water, and sky. As the sun rose, so too did my friends. The crumbling concrete dock down the beach provided stark silhouettes to complement the natural elements. Soon, the first direct rays of light peeked above the horizon; it was the perfect sunrise (not that I’ve seen all that many of them). As if driven by an unseen power, I continued to take pictures as the sun gradually moved higher into the sky. Rich, warm colors faded from the underside of the clouds as the morning moved onward. I was finished with my artistic expression, and it was time to eat and begin packing for another great day on the bay.

JOIN THE CLUB
One more walk around the relics of the former inhabitants of the Lonely Island lighthouse complex (first occupied in 1870), and it was time to move our kayaks to the water and fill the hatches with gear. We bid a very fond farewell to historic Lonely Island and moved beyond it to see what the next islands would reveal. In the distance, we could see 2 or 3 small boats, the most we had seen all weekend. Six miles to the west was Club Island, with its central “harbor”, said to be an attractive place for sailboats to anchor for the night. Another couple hours of paddling on calm seas beneath cloudy skies brought us to that island. The smaller boats had moved on, and a large sailboat with a raft in tow was the only boat in sight. It was moored near the island’s little harbor, actually just a shallow lagoon, or pond. What looked like a huge boulder from farther away was actually a very tall pile of rocks excavated from the island and left near the water’s edge. The sailboat headed north as we approached, and we took a break on the stony shore. Like all the other places, nobody lived on Club Island, and there were no signs that buildings ever existed there. Soon, we left and made our way south along the shoreline. The tip of Club Island was a narrow point that extended into Georgian Bay, and continued much farther as a shallow, rocky shoal. We finally rounded that end of the island and set our sights in the next isle, Fitzwilliam, where we planned to camp that night.

NAME CALLING
An additional 7 miles of paddling in light chop brought us to Fitzwilliam Island, the largest by far of any island we visited on this tour. It was named for Royal Navy Captain William Fitzwilliam Owen, who, in 1815, was the first to chart Georgian Bay. Captain Owen called it “Lake Manitoulin”, an English version of the Ojibway Indian name “Spirit Lake” (Owen Sound is also named for him). Royal Navy Captain Henry Bayfield, who made more detailed charts of the bay, renamed it in 1822 after King George IV. His charts are the basis of those in use today.

PAVING THE WAY
The location of our final campsite was uncertain, since little information was available about suitable places to seek shelter on this grand island. With a circumference of about 22 miles, it is just a little smaller than an island in the Niagara River near my home between Buffalo and Niagara Falls, named “Grand Island”. We aimed for the northern tip of the big island, and landed for another break to stretch our legs and have look about. I had hoped to find a place to camp about half-way down the shoreline, near a protrusion called McCarthy Point. Before we paddled that far, we saw an interesting area of rock shelves that stuck out dramatically from the dense cedar forest that covered most of the island. As I paddled closer to one of the more fascinating areas, my friends told me it looked like a great place to camp. That suited me, and we landed on a coarse, gravely place with layers of rock shelves conveniently rising above it. I likened it to a castle because of the grand layered rocks rising up to the trees, but Joe called it “the amphitheater”, for the overall shape of the rock formation. We made camp in the amphitheater; no giant spiders, no 100-year-old lighthouses, just majestic natural beauty. There were broad, very flat sections of rock with many places on which to pitch a tent, and more flat areas were just 2 feet higher on another layer of the sedimentary rock. My chart identified that part of Fitzwilliam Island as “Pavement Point”, a very appropriate term. We unloaded the 3 kayaks and walked all around to choose our tent sites. When our scouting was done, we set up camp. Joe filled his filter bag with water, hung it from a cedar branch, and fired up his stove. Meals were an important part of our day, because once we stopped and set up the tents, all that was left to do was eat, drink, look at the water, and maybe read a little. I walked around for a while, exploring the shoreline while taking pictures. Once the sun was low, biting flies came out and we retreated into the tents.

FITZWILLIAM DAWN
After a good night’s sleep, I awoke to the pre-dawn sky with its warm and beautiful colours. It was our final morning of wilderness camping on Georgian Bay, with another great sunrise and more great photo opportunities. As I captured image after image of the sunrise, Joe and Patti also got up, joining me to revel in the day’s early beauty. Like the previous days, we took our time packing, eating breakfast, loading the kayaks, and soaking up the wild, watery beauty of the bay.

HAPPY HOPPING
We would have to paddle approximately 20 miles to reach Tobermory and Joe’s car at Dunks Bay, but we knew it would take only 7 or 8 hours, so we had plenty of time. I charted a course that would allow us to island-hop our way back, reducing the open water crossing to a series of shorter paddles of 5 miles or less. Our first hop took us to James Island, a quarter-mile long island inhabited by birds; lots of birds. We found a spot near shore where the gulls, terns, and cormorants weren’t, and took a short rest. The island gradually cedes its land into the bay with wide, shallow shoals, particularly at the western end. Next, we paddled to the end of Lucas Island, a smaller, 640-yard long piece of rock that was more on our path back to port. As we approached, it looked like 3 tents were set up near the shore. Closer inspection revealed 3 large boulders with patches of yellowish lichen growing on top. After another short break, we headed for Cove Island Light, less than 5 miles to the south. The water kept its consistent half-meter wave height that we had grown used to, and we landed near the lighthouse on wide, flat shelves inside a tiny pocket cove. No sightseeing this time, and we were soon making our final crossing to Tobermory.

MECHANICAL FAILURE
We had nearly paddled the full length of Cove Island when Patti said one of her foot pedals came off. Since the pedal controls the rudder, she also lost that control. I told her she would have to finish the trip without use of a rudder, but that comment was not enthusiastically received. Conveniently, there was a good landing place on North Otter Island, and we stopped to make repairs. Turned out that one fastener for the foot pedal assembly had been off for a while, perhaps weeks, so when the second nut fell off, the entire bracket came loose. We managed to get one fastener back on, restoring use of the pedal and rudder to help control the boat in the wind.

BEACHED
The final 5 miles were the most difficult of our long journey, due to a stiff off-shore wind that created larger waves and a headwind that battled us until we entered Dunks Bay. The beach where we launched 3 days before was a sweet sight. We eased our kayaks onto the sand among wading adults and splashing children who were fascinated by our boats. The car was still there, intact, and no parking tickets. After 66 miles and nearly 21 hours of paddling at an average moving speed of just over 3mph on Georgian Bay, it was good to be back in town.


WRAP-UP
My idea of a fun kayak trip is to see lots of interesting things and pile on the miles. I appreciate Patti and Joe’s willingness to follow me and venture out of their comfort zone in order to venture so many miles onto one of North America’s premier sea kayaking destinations – Georgian Bay. On this trip, we covered a lot of water and paddled out to some islands that very few people ever see, let alone land or camp on. If you haven’t already done so, be sure to read the other 3 parts of my trip report for this adventure: “Introduction and Background”, “DAY 1 - Preparation, Launching, and Camp”, and “DAY 2 - Halfway to Lonely”. Each report has a link to an album of photos that illustrates that day’s paddling and camping. This tour of the islands signifies my ultimate Georgian Bay kayak trip because of the miles and the fact that guide books don’t cover these remote islands Anything else we do up there will be either a repeat of some segment of this trip, or something that is commonly done by other paddlers along the eastern shore of the bay. I don’t know if I can top this trip, but you can be sure I’ll try! – Bob VH

PS: Thanks to the Chicago Area Sea Kayakers Association (CASKA) for their trip reports that provided the only information available anywhere that described some of these islands. I hope my own trip reports will add to the information base about these beautiful, remote locations.

Posted by Algonquin Bob at 1:47 PM