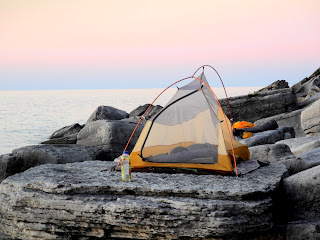 DAY 1 - Preparation, Launching, and Camp - Bob’s “Spirit of Adventure Tour 2011”
The plan was to launch our kayaks in Tobermory and paddle out onto the deep waters of Georgian Bay while we island-hopped for 4 to 5 days, camping on islands of various sizes and covering about 65 miles. The reality of it is that we did exactly that, except we had to improvise on our first night‘s campsite. In previous years, the 6 campsites on Flowerpot Island were “first come - first served”. You would walk up to the harbormaster or the cruise line ticket booth and pay for a campsite; some books, literature, and websites still proclaim that fact. With the recent construction of a National Park Visitor Center in town, campsites now can be reserved in advance at that center, or on line. The harbormaster told us to go to the ticket booth, and the ticket booth attendant told us to go to the visitor center where we were informed that a man had reserved ALL 6 campsites because he was going to be proposing to his girlfriend that weekend. I propose that letting one person reserve 6 campsites is not fair. We wouldn’t be camping on Flowerpot Island ($9.50 per person per day to camp on a primitive site), so we were forced to save $28.50 (plus GST & PST) and camp for free somewhere else. If you’ve ever gone camping r paddling in Ontario, you know that nothing is free there because there are fees to walk, visit, launch a kayak, take out a kayak, park, and camp anywhere….. unless you do it the way we did. We parked for free, and because all the islands were uninhabited and very remote, we also camped for free all 3 nights.

I’d been planning this trip for a year - since I completed a 30 mile 1-way trip across the mouth of the bay last July. Planning pays off! We drove to a narrow strip of public access beach on Dunks Bay where Joe could park his car for 3 or 4 nights without getting a ticket. I checked all the signage, and there was no restriction on the time we could leave a car there, so game on! Joe, Patti, and I began shuttling all of our gear between the car and the sandy beach, and finally carried our 3 sea kayaks to the water, squeezing the boats into a small public area of the beach that was also occupied by many other people using the beach for more traditional purposes, such as laying on towels, swimming, and building sand castles. We crammed all of our camping gear and food into the hatches, and without ceremony, we were on the water and began paddling. I zeroed the trip computer settings on my GPS receiver and made certain that I had a waypoint set for the beach.

A few days earlier, I sat in front of my desktop computer with “Google Earth” on screen and transferred the coordinates of all the islands into my handheld GPS unit, so we could aim for an island even if we couldn’t see it - a cautionary step in case of fog or other weather conditions that could obscure our visual points of reference. Last year, the water was so calm and flat, that it was almost boring; I hoped for similar conditions for Joe. My buddy Joe was on his first-ever trip on big water. We would have several open water crossings between islands that were 5 to 10 miles each, and rough water could make it interesting. Patti has paddled extensively on the Niagara River, with several near-shore trips on lakes Erie and Ontario as well, and has previously paddled on Georgian Bay.

We had enough experience among us that I wasn’t too worried about this large step I was taking by more than doubling the mileage of last year’s outing. As for safety, we all are experienced paddlers and know what can happen in a kayak, so the wearing of life jackets is a normal part of our paddling attire. Inexperienced people who don’t know enough about the sport are the ones who often opt to not wear a life jacket. By my mandate, as well as common sense, we all wore neoprene shirts (wet suit tops) in case if accidental immersion in the cold Great Lakes water. The rest of our clothing consisted of quick-dry shorts, water shoes, wide-brimmed hat, sunglasses, and plenty of sunscreen. I neglected to use lip balm with some sort of sun protection factor, and I regretted that (Note to self: use a high SPF sunscreen when paddling in the sun for 4 days!). We all carried a whistle, light, throw rope, and paddle float, and Patti also carried a tow line in case one of us became incapacitated and couldn’t paddle (illness, shoulder, arm, or hand injury, etc.). In addition to all of that, I carried aerial flares, signal flag, strobe light, small air horn, handheld VHF radio, a SPOT satellite rescue message device, and a navigation chart of the section of Georgian Bay we were in, sealed in a waterproof chart case. All of that was either on deck or in the cockpit behind my seat. Being the expedition photographer, I also carried 3 cameras; one in a waterproof case stowed with my gear, one in a waterproof case on deck, and a small waterproof Kodak “PlaySport” video camera attached to a little flexible tripod where I could reach it on the deck in front of me. I also transmitted a twice daily “I’m OK” message from my satellite device that relayed an e-mail to select people with a link to a map that showed my exact location. That same device could also send a “Please send help” message or a “911” (send the chopper!) message. My main source of help would have been the waterproof handheld VHF radio I bought recently. With that, I could listen to NOAA weather reports, status reports from the Coast Guard or other boaters about navigation hazards, and could also contact nearby boaters or the Tobermory Coast Guard station in case we needed immediate assistance. They call me the “Safety Nazi”. I do a lot of things that prompt people to say I’m crazy and take too many risks, but I minimize risk by planning, preparation, and by carrying the right gear. I wasn’t worried.

Back to paddling - We paddled from Dunks Bay into the big open waters of Georgian Bay and began our adventure. Joe had never been up there before, so I decided to detour over to Flowerpot Island to let Joe get a close view of the 2 sea stacks that give the island its name. Later, I learned that we were supposed to pay a fee to land there and walk around. We paddled up onto a rock shelf and pulled the boats farther up while we walked around (see photos of the “flowerpots“). I’d been there several times before, so I just hung back and took pictures. After our exploration break, we headed to the next island, Bears Rump, about 5 miles from shore, where we hoped to find a suitable place to camp. We had paddled nearly all the way around the rocky shoreline when we spotted a good landing zone and flat rock shelf that would hold our tents. We hauled our gear onto the shelf, carried the boats up and mostly out of sight behind the rocks (free camping is illegal), and attached our cockpit covers. Before we carried Patti’s kayak up from the water, I picked up a rock to get it out of the way, and standing where the rock had been was the BIGGEST SPIDER I HAVE EVER SEEN (other than in a zoo or in my cousin Louie’s bedroom)!!! I’m glad that I had a complete change of clothes with me. The spider growled and snapped at me (perhaps a slight exaggeration)… the spider just stood there silently while I screamed like a little girl (not as exaggerated). It was 3 to 4 inches across, and I later identified it as a Wolf Spider, which can have a body over 1 inch long and a leg spread of 4 inches. We set up our tents and made sure the screen doors were always zipped shut. Once the boats were stowed and tents set up, it was time to eat. Joe had his stove ready and we boiled water - that’s as close as cooking as I get. The island was covered with a thick cedar forest. Between the density of the vegetation and the size of the spiders, further exploration was not possible.

We laid our wet clothes across the rocks, watched the sun set, and zipped ourselves into our tents. Biting flies, gnats, and mosquitoes buzzed about, while giant mutant spiders lurked unseen. Since the weather forecast for the weekend was all good, we didn’t use the rain fly on our tents, allowing for good air flow all night, and good sleeping once it cooled down. In the morning, Patti told us she had heard a woodpecker in the distance; all I did was sleep. We rose in the dawn’s early light and had breakfast-with-a-view.
While we were loading our boats, Patti noticed that one of the island’s inhabitants had been busy overnight and left something attached to her neoprene top. At first I said it was a cocoon, but quickly realized that it was an egg sack - spider eggs, and Mama Spider was still close by on the shirt! Luckily for me, it was a smaller (1” across) spider. I assisted the spider’s exit and scraped off the egg sack; a web-encased bundle of bright red eggs (ick). Time to move on.
Posted by Algonquin Bob at 9:23 AM