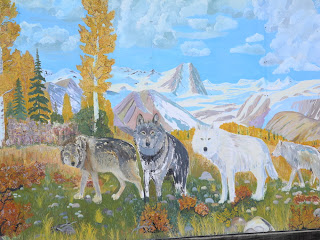 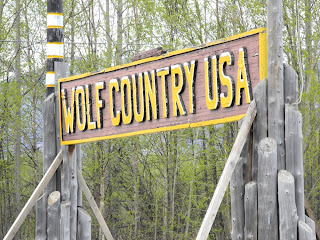 Just back from 10 days in Alaska (May 2011). One stop I made was a place in the town of Palmer ( north of Anchorage) called “Wolf Country USA”. It’s a tourist attraction with the premise that people can see wolves close up. The exterior of the building was a bit run-down, and featured a gift shop as the only entrance. The large gift shop sold various articles that featured wolves – most notable to me were the decoupage images of wolves varnished onto wooden plaques. I hadn’t seen decoupage since 1980, so it was a shout-out to the past. The store reeked of something – perhaps dog food, moose meat, or maybe it was wolf dung. I don’t know what produced that pungent odor, but it didn’t help my appetite any. The owner of the business, Werner Shuster, a man of perhaps 80 years of age, enthusiastically led us into the fenced area that housed 20 or more wolves, or wolf-hybrids as he called them. He noted that “there is no such thing as a pure wolf”. I entered the gate with my camera ready to snap many photos of the majestic animals in their home that featured snow-covered mountains in the distant background. What I observed shocked me, depressed me, and I immediately put my camera away in its case because I didn’t want to remember what I saw (later, I managed to take 2 photos of the wolves). 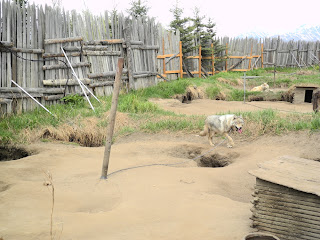 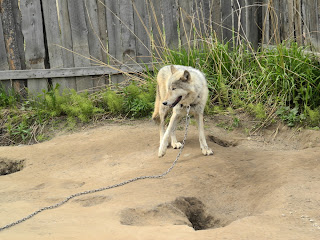 Each animal wore a collar attached to a heavy chain approximately 10 or 12 feet long, and attached to a tall pipe in the center of the barren piece of purgatory in which they lived, giving each wolf a space with a diameter of 20 to 24-feet in which to “roam”. Not quite what the sign out front depicted. Each wolf was separated from the neighboring animal by several feet of open space, and they are unable to physically interact. Their website features carefully cropped images that don’t show the chains, or the raw skin under their collars, or the nature of their demeaning existence. The animals’ constant running in circles for their entire lifetime (up to 20 years), has worn away all vegetation, and some of the wolves had excavated underground dens in the hard soil. Technically, I suppose, there is no visible animal cruelty, since each animal has shelter and water, and seems to be well-fed. Some of the water bowls had a green scum growing, but we were assured that algae “is the best thing for them”, and he “never has any veterinary bills”. I was not surprised that care by a veterinarian was not in his budget. He also told us that he gets moose meat, and each wolf is fed weekly. The owner threw dog treats to each wolf as he proudly passed by each of them; bragging about “His movie stars” and telling us they would all be dead if he hadn’t saved them by confining them safely away from the natural world. I wonder if he would like to be confined to a small room in a house for his entire life if it meant he would live longer.

Born in “Wolf Country USA”, never see actual wolf country, or run, or do anything else that is natural for wolves (except howl on command).

It was disgusting, and I have left a message on their website telling them as much. I wondered to myself if they ever get exercised. They do not. He did say that the animals get loose 2 or 3 times…. a year…. when the chain breaks. Some of the animals get conjugal visits so their offspring can be sold to buyers across the world. Local sales of his product had dropped off because it’s illegal to possess or sell wolves or wolf hybrids, and the State of Alaska is trying to enforce that law, but the definition of “wolf” is a bit unclear. Mating the wolves, according to Mr. Shuster, consists of putting them on chains that are just long enough for the animals to reach each other, but short enough to not get tangled. I left feeling ashamed that my admission fee had contributed to the ongoing cruel isolation and exploitation of these “wild” animals.

The above is my opinion based on direct observation. I have included links to the official website and to another site that provides more information about this situation. If you do an Internet search for “Wolf Country USA”, other sites will come to your attention, including sites that are attempting to end this deplorable situation. - RVH

Bob, I'm Alex Hall's father, and we run Adirondack Wildlife Refuge and Rehabilitation Center in Wilmington-Whiteface, NY, at www.AdirondackWildlife.org. Thank you for this story. It is absolutely heartbreaking, and it demonstrates that folks can rationalize anything. I know that Alaska has banned wolf hybrids, but there's no smoking-gun genetic test that will stand up in court. Be that as it may, I find it hard to believe that Alaska does not have animal cruelty laws, which should certainly apply here. Steve Hall